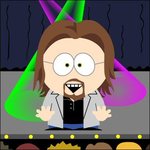 Went here for brunch with a friend this weekend, and it was really good. I had a shitake mushroom and asparagus omelette; the eggs in the omelette were a perfectly consistent fluffy bit of heaven, the asparagus was crisp and tasty. The bacon I got on the side was thick, juicy and savory. The English breakfast tea was smooth and strong. I also got to try some polenta, fried, with a Thai-like spicy peanut sauce which was delicious (and I don't even like polenta...)

Stopped in to pick up a birthday card for a friend of mine, and ended up picking up some cute Care Bears wrapping paper as well. I hadn't realized this place wasn't just another "Hallmark Store" (there's another of those in the mall, too), but I should've known, because the non-card merchandise was MUCH nicer... No space wasted on gaudy Christmas ornaments featuring licensed characters from Disney, for one thing.

No, they featured some very nice little 'memories' things, nice dark wood boxes with glass panels, scrollwork, and the like. A good collection of nice coffee mugs with some very nice artwork on them, and of course, greeting cards by the truckload.

Overall, I was pleased with their selection, and felt like the store was a bit classier than Hallmark stores, which often seem kinda "shlocky" to me...

PROS: Mall location, classy environment
CONS: When did they start charging $3 for a greeting card?

In the new Shops at Tanforan (a fancy way of saying "Mall"! -- but they are very nice, too), the Spencer's Gifts there is actually fairly remarkable to me.

I've wandered in to browse a few times, and I've always been greeted by the clerks with a very friendly, seemingly genuine, "Hey, how's it going?" The store's layout is very good, not nearly as claustrophobic as some of them, but not as boring as others (in the Serramonte Mall, for example, all the racks are simply lined up in a row). Here, the layout is a bit square, with the cashier in the middle, and the merchandise grouped into little "spaces" along the wall, with small shelves jutting out to help define the space (someone did a good job on the store design, for sure). There's a section for the "sexy stuff" (I'd say "naughty", but the whole point of the store really seems to be "naughty"), there's a section for the "beer stuff", a section for the "gadget stuff", "t-shirt stuff", etc... It makes it very easy to find what you're looking for, or avoid stuff you're not interested in.

This is a Spencers I actually enjoy browsing.

You're not in the minority here, Stu... I'd never been before, and thought I'd try it, because I love a decent burrito.

I stood around waiting for my food for at least 15 minutes; it didn't help, I'm sure, that there was some Waiters-on-Wheels guy before me, picking up some huge order, but you'd think perhaps they'd try to alternate some of the work on the big order to accomodate the customers that were standing around waiting.

Once I got the burrito back to eat (I got it "to go"), I was very underwhelmed. It wasn't *bad*, per se, but it was very bland. The guacamole I got with the chips wasn't bad -- but it really tasted quite a bit like the pre-made stuff you can find at a supermarket. The whole experience was very underwhelming, especially given the price; I could've gotten a really great burrito, chips and guac from Chipotle for the same price -- and from a mom-and-pop Mexican tacqueria, you could probably get a price break, too.

I first went to an Applebee's when I had been living in Massachusetts, and before I discovered what really good steak was. I remember fondly really liking the place.

I hadn't been to one for more than half a decade until I finally tried the one in Redwood City with a friend of mine -- who was loathe to try it, because her experience with an Applebee's in Oregon was very bad.

Neither of our past experiences seemed to reflect on this Applebee's. The food is fair; the steaks aren't bad, but aren't as substantial as you would get at an Outback or Black Angus. Perhaps it's because I've been exposed to such good restaurants in the area, the reality of Applebee's doesn't match up to my memories.

On the other hand, the issues my friend had with Applebee's in Oregon were apparently also unfounded; unlike her recollection, our service has always been good, the staff friendly, and drink delivery fairly prompt. And she's decided she absolutely loves the Mudslides...

So now we have a very casual restaurant as an option, when we're tired of everything else.

Went here for dinner on the recommendation of a friend. While I've definitely had better sushi, there's just something nifty about picking up plates of sushi off little boats going around in circles. There were two chefs working the island that night, and we sat near one of them -- so we got first dibs on the stuff he put out fresh, which was great.

One roll I really enjoyed was a california roll with spicy tuna (or it might've just been salsa), over it, and little sticks of crunchy dried potato scattered overtop (just be careful you don't stick yourself with a potato stick while you try to get one in your mouth...)

Our tea and water was kept topped off very efficiently. The place was busy, though; we had to wait a few minutes to get adjacent seats, but when we left, there was a good line of at least five people waiting, and there were no seats open at all.

The bill came out to about $50 for two people, tip included, which wasn't bad since we'd special ordered a spider roll, and besides that, we each finished off about six plates of sushi (which run from about a buck and a half to about three bucks). Definitely a worthwhile dining experience. But I wouldn't want to try to park in the area...

A friend of mine said she loved the sandwiches here, so I thought I'd try one with her. I got a barbeque pork sandwich (hold the cilantro, please -- I really don't like cilantro). The sandwich was very good, which kinda surprised me, because it had a lot of carrot shreddings in it, and I'm not always a fan of carrots. But I think they were slightly pickled, and combined with the nice crisp cucumber and the tasty pork (which admittedly was more like some cheap Chinese barbeque pork appetizer -- you know, the 'bright red stuff'), it made for a very nice little sandwich. Satisfying, but not too filling.

I don't know that I would make a plan to go back on my own, but I definitely would have no problem eating there again if my friend asked!

This Starbucks, at the Hillsdale Mall, is actually *outside* the mall; you have to go out through the Banana Republic, or just walk around from the Macy's or the Sears to find it -- and there isn't much in the way of signage inside the mall.

The location itself is very tiny as well; when I got there yesterday, there were about eight people milling about, and they basically occupied the entire little shop. Pick-up is right next to the entrance door, so even though few people were in line, you had to fight through the crowd to figure that out. There are only maybe three little tiny tables inside, with a total of about nine chairs -- but they have larger outdoor tables (four, I think) with more chairs outside. Of course, it's on the east side of the mall, so in the afternoon, you're in the shade, and the wind can whip through there pretty good.

They also messed up my order; gave me a white chocolate iced mocha rather than a regular iced mocha, but that may have just been a fluke of miscommunication (since there was such a density of chattering people waiting for their coffees).

There are DEFINITELY better, more convenient, and larger Starbucks out there. I'd recommend them. On the other hand, if you're already at the mall, and you're not fond of Gloria Jean's (which is actually *in* the mall), this is the closest Starbucks....

When I first moved out to the Bay Area, all my geek friends went on and on about Fry's and how great it was, and jumped at any chance to make a trip down here. I went once or twice, and it was an impressively large store that caters to geeks; for the electronics hobbyist, it definitely has a good selection, better than your average Radio Shack.

For a while, it seemed like their big thing was that they were cheap. Sure, you had to put up with horrific customer service, and quite often you'd find what you bought was actually an opened box, missing some things that were not returned, and then re-shrink-wrapped and sold (which I'm not even sure is *legal*), but they were cheap, and often it was worth the risk.

But that's not even true anymore. I've found better deals on unopened stuff at Best Buy than at Fry's -- and Fry's seems to not be stocking name brand computer hardware anymore, for whatever reason. So now I'm really not certain what the draw is.

They do occasionally have some good deals; they'll often do "overstock" sales, where you can get new video games or DVDs dirt cheap, but is that really such a big win?

At least parking is fairly plentiful.

Working in a startup just down the street, I tried this place for some office equipment, and I was shocked and appalled at just how little high-tech gear was available. Basic things, like power strips, were in short supply (or had no options). Simple dot-com staples like ethernet cables were hard to find. It seemed like nothing I needed was available at this store. It was the Office Max that HQ forgot...